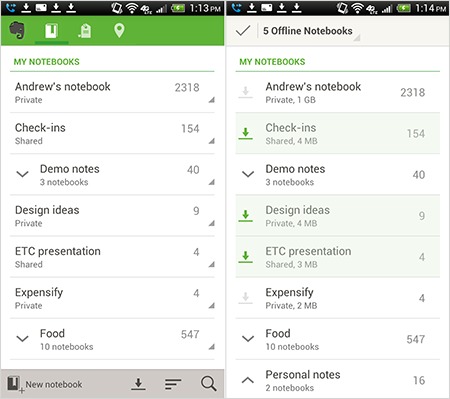 Evernote has just launched a new update for its Android app that brings some pretty slick new features. The first thing being touted by Evernote is a major improvement to the premium offline notebooks feature. This update adds the ability to select multiple notebooks at once, which makes it much quicker to set notebooks for offline access.

Evernote has also brought some major improvements to the note editor toolbar. Evernote removed a bunch of unnecessary buttons from this bar, making it more efficient to edit your notes. Buttons like adding audio notes and attachments have been moved to the “+” menu in the action bar. This should make it easier for you to create things like bulleted lists and checkboxes from the editor toolbar.

This new update should go a long way towards making Evernote even easier to use. Besides the new features advertised, this update also improves the speed and performance of the app. Evernote has also said its next update is already in the works, although they did not mention what features will be coming in the next version.