The Essential Phone has yet to be released in the market but one redditor claimed that he saw the smartphone out in the wild. A video of a man using the new phone was shared on YouTube, showing off the phone that is not even out in the market. The video was actually a Snapchat by a friend of this guy we only know as ‘DS’ on YouTube. There’s not much information posted but it’s interesting to read the comments of people on both YouTube and Reddit where we found the post.

The 9-second video showed a white smartphone being used by a man who was also wearing a pair of earphones. It appears that he was navigating through the phone opening a number of screens. We could only recognize WhatsApp being opened.

How did the Snapchatter know it’s the Essential Phone? He must have remembered the images from the earlier announcement. Honestly, if we saw the phone ourselves, we couldn’t tell what model that was. We would just probably say it’s another Android phone from China.

The phone had a front-facing camera positioned in the middle just like the early images. Compare the images below:

Some people are saying the phone in the video could just be a prototype, noting the difference between the color of the bezels. The one captured in the video is white while the one posted by Essential Products has a black bezel even for the white model.

We’ll know for sure once the smartphone is officialy released in the market. 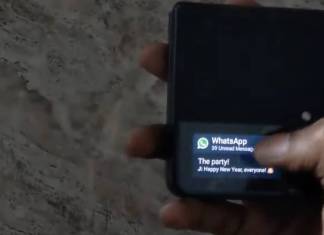