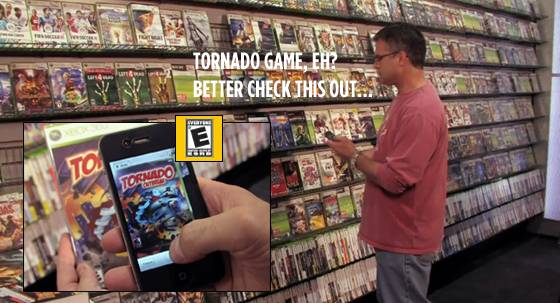 Are you a parent or otherwise in some way or another a person whose gotta buy a video game for a kid? Are you also the sort of person whose generally unaware of the content of games because you basically don’t play them ever? You aren’t alone. MOST people are like that. Nuts, huh? You’re in luck, there’s an app for that. It’s an ESRB (Entertainment Software Rating Board) ratings app released today in the Android Marketplace. What does it do? You turn it on, take a photo of the cover of a video game, and instantly receive rating information, age group the game is good for, and reasons for the rating and age group its been put in.

“Aim. Snap. Learn.” That is, in actual reality, how simple this app is. And it’s going to be incredibly helpful for parents attuned enough to be able to work an app but not quite in the world of video games enough to know who which ones are appropriate for. Know what I mean? Available in the Android Market today – just search for “ESRB.” Take a look at the press release below:

NOTE: Also available for iPhone, if for some reason you’ve got one of those too and happen to just be snooping around here on Android Community. lulz.

NEW YORK, NY – Aim. Snap. Learn. It’s just that easy for parents to get detailed video game rating information before buying a video game this holiday season. The Entertainment Software Rating Board (ESRB) – which assigns the age and content ratings for computer and video games – has upgraded its free mobile app to include the ability to search for rating summaries using the phone’s camera. Now parents can quickly and easily look up a game’s in-depth rating summary by simply snapping a photo of the game box with their iPhone or Android phone.

Video games are once again expected to top holiday wish lists. But just like movies, not all games are appropriate for every child. Rating summaries, which are available at ESRB.org but are not displayed on game boxes as are the ESRB ratings and content descriptors, provide parents with a detailed, straight-forward explanation – including specific examples – of the content that factored into a game’s rating. By using the ESRB mobile app to access rating summaries, parents can make truly informed game choices for their children.

“When buying a video game for a child it’s important to check the game’s rating and understand its content to determine if it’s the right choice. And for a parent who still isn’t sure about whether a game is OK for their child after checking the rating information on the box, rating summaries provide exactly the types of examples that help parents make that final decision,” says ESRB president Patricia Vance. “With our new mobile app all you have to do a snap a photo to access the rating summary right from the store, where this information is usually needed most. By using the ESRB ratings – and tools like rating summaries – parents can be confident that they’re giving games this holiday season that are not only fun, but also age-appropriate.”

The ESRB mobile app is available for free via the Apple App StoreSM or the Android Market. It offers easy access to ESRB rating information for over 20,000 titles by either taking a photo of the game box or typing in the name of the game. Rating summaries are available for all games rated since July 1, 2008, which means that most of the games likely to appear on kids’ wish lists this year will have rating summaries.

In addition to the mobile app, parents may also want to check out the ESRB Facebook page for valuable tips and resources for choosing age-appropriate video games, or follow ESRB on Twitter (@OKtoPlay). Ratings information, including rating summaries and additional resources for parents are also available on the website, ESRB.org, and mobile website, m.esrb.org.

Since their inception in 1994, the ESRB ratings have become a trusted resource for parents when choosing computer and video games. In April 2007, the Federal Trade Commission (FTC) released a report1 which found that nine in ten parents are aware of the ESRB ratings, 87% expressed satisfaction, and nearly three quarters use them regularly when choosing games for their children.

The ESRB rating search app is developed by Point About and the image recognition and visual search is powered by IQ Engines.