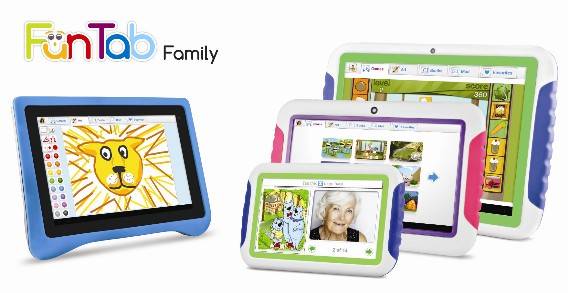 Coming out of CES 2013, we have mention of some new kid-friendly tablets from Ematic. These latest, of which there are four include the FunTab Pro, FunTab, FunTab XL and the FunTab Mini. These four tablets will make up what Ematic is referring to as the FunTab Family and they will all arrive running Android 4.0 Ice Cream Sandwich with the Zoodles Kid Mode.

Kicking the details off with the FunTab Pro and we have a device with a 7-inch display, 1GHz processor, dedicated GPU, front and rear-facing cameras and a battery life of up to 8 hours. The FunTab Pro will ship with a variety of faceplates to switch up the look. The faceplate colors will include blue, pink and red. This model is priced at $149.99. Moving over to the FunTab and we have another 7-inch display. The FunTab is powered by a 1.2GHz processor with a 400MHz GPU, has a battery life of up to 5.5 hours and is available in blue/green or pink/purple. The FunTab also has front and rear-facing cameras and is priced at $119.99.

Otherwise, as these are kid-friendly devices, they are sporting kid-friendly features. Some of the goodies include an interactive Story Books and Art Studio, a Video Mail feature and games such as Angry Birds, Where’s My Water? and Cut The Rope. These tablets are also all featuring a “durable” design to include a rubberized grip. Finally, as for the Zoodles interface, this will allow parents to monitor what the child is doing including getting a detailed report on the educational progress, a gallery of their artwork and storage to record video messages.