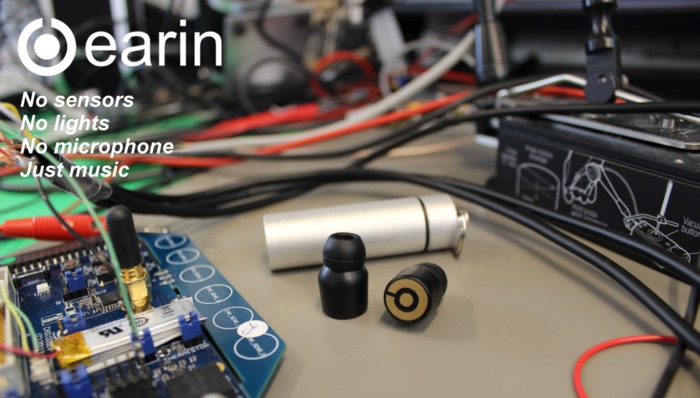 Movies and TV shows often portray Bluetooth headset-wearing people as kind of braggarts or douches, walking around, being constantly “on the phone” and talking. Even in real life, these headpieces aren’t exactly comfortable and convenient, since they’re still not totally wireless. But the newest earbuds from Earin are probably the smallest in the world and are totally wire-free.

The device was made possible through crowd-funding on Kickstarter, even exceeding their goal by around £100,000. This may be a sign that people really believe we need this kind of earpiece technology. The Earin earbuds are just two small earpieces, weighing at just around 5 grams each. And you don’t have to fear that these small devices might fall out of your ear (or fall inside, which may be worse) since it comes with a concha lock to make sure they stay where they’re supposed to be.

When fully charged, it has 2.5 to 3 hours of playback time, which may be too short compared to other bluetooth ear devices, but considering its size, that is pretty good already. It also comes with a small capsule that not only serves as a storage, but also as a charger on the go. So the playback time is extended when used with the charger.

There was a similar device a year ago called Split which also tried to get funding for the world’s smallest earbuds on Kickstarter, but they failed to reach their goal. Earin’s crowdfunding success will hopefully see this product to completion and in the market soon.