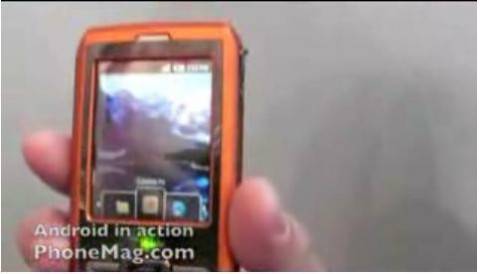 You may not have heard of E28, but they have something particularly rare on show at the Mobile World Congress: a current, off-the-shelf handset that’s running Google’s Android cellphone platform. I stopped by to shoot some video and find out exactly how well the Android OS works, away from reference designs and hardware test-beds; remember, this is basically E28’s E2831 quadband GSM smartphone, with WiFi, a 2.2-inch QVGA touchscreen and 1.3-megapixel camera, entirely stock aside from the OS. The good news? Android works pretty damn well indeed.

What makes this particularly interesting is the specs of the E2831: it uses a relatively old OMAP TI 730 chipset, running at just 200MHz, and has a mere 64MB RAM and 64MB ROM. Android runs with no modifications, and the E28 team were even able to download applications coded for the platform from the internet and install them directly to the handset. This, then, is some of that unlocked, open-source simplicity we were promised when the platform was first announced.