There has been no official announcement from Samsung about this new product, but apparently a Dutch online retailer now has a Galaxy S5 Neo listed on its site, with pre-orders starting and delivery expected by the end of the month. Lending credence to the validity of this listing is the fact that three of the Netherlands’ leading carriers are also listed as offering plans for this new smartphone, a variant of the OEM’s 2014 flagship, the Galaxy S5.

The specs listed in the site also seems to be consistent with the rumors and leaks that have been going around regarding the Galaxy S5 Neo. The 5.1-inch device boasts of a Super AMOLED FullHD display with 1080×1920 pixel resolution and will be running on a 64-bit octacore Exnynos 7580 chipset and a Mali-T720 GPU. It has 2GB RAM, 16GB onboard storage, but with microSD card support to expand the storage. The camera is 16MP at the back and 5MP at the front.

Online news outlets reported that the Galaxy S5 Neo received WiFi certification a few days ago and also appeared on the GFXBench site, where the specs were shown, and also matched the previous leaked details. But of course, until Samsung officially tells us that the Galaxy S5 Neo exists and will be available soon, then we still don’t know if everything is real. 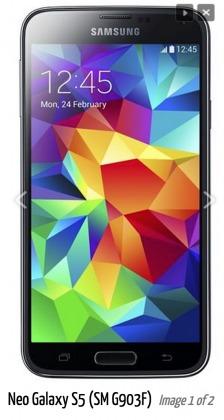 Belsimpel, the Dutch retailer at the center of this news, has listed the Galaxy S5 Neo with a retail price of $470. It will be available in Black, Silver, and Gold. At least that’s what they’re telling us.