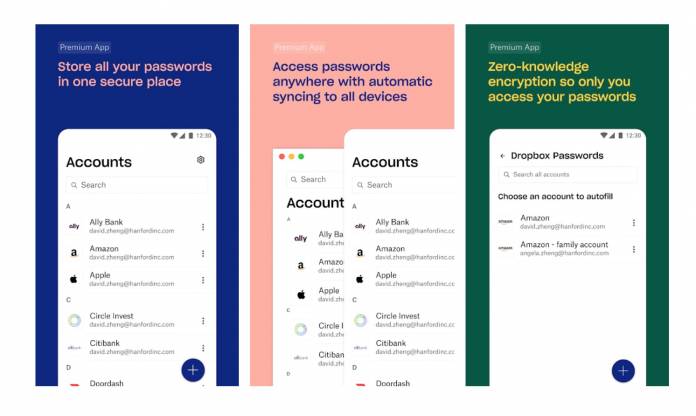 With the sheer number of apps and services that we sign up for, managing all those passwords can sometimes be a pain. And so we turn to password manager services, but there’s always that fear of what will happen in case they themselves become hacked. Dropbox has released a new service that aims to quell that fear as their Dropbox Passwords is now on beta but only for selected users. Not much is known about it for now but you do get that “zero-knowledge encryption” mention in the product page.

The Dropbox Passwords app can now be seen on the Google Play Store but it says it’s only on an Invite Only Early Access so it means you can’t install it just yet. Based on the description, it works just like other password manager apps. You store all of your passwords in “one secure place” and fills up usernames and passwords when you’re signing in to various apps and websites. You can also use it to create and store unique passwords when signing up for a new account.

The product page also says that the app users zero-knowledge encryption so that the passwords are not visible per se in Dropbox servers and only you can access your account. So even if Dropbox gets hacked or something, they won’t be able to access anything since these are encrypted. It will also sync all your passwords across devices so you don’t need to painstakingly sign in every time.

What is not clear right now is if Dropbox Passwords will be connected to your Dropbox account or if it’s a totally different thing. Will it also be available for free users or would they have to be a paying subscriber to be able to use the app and service. And would there be a stand-alone version of it where people can sign up and pay or use the app even without a Dropbox account.

While the app is already available on the Google Play Store, you won’t be able to use it or sign up for it just yet. Well, you would have to be part of the randomly selected beta group of Dropbox Password testers.