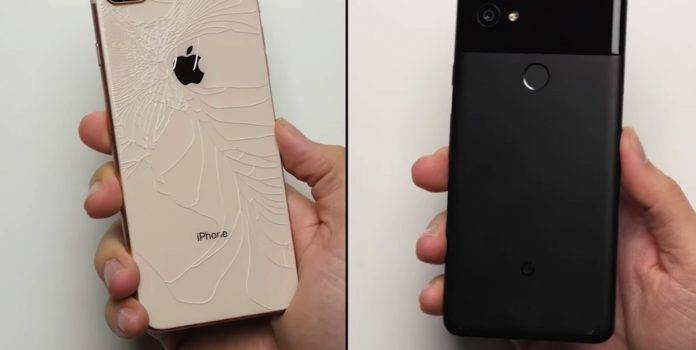 Around the same time last year, we saw the Google Pixel go through a series of Durability and Drop Tests. It’s the  Pixel 2 XL’s turn to be drop tested and compared against the iPhone 8 Plus. We already saw the teardown and we’ve got our comprehensive review. PhoneBuff’s David Rahimi is at it again. In a new video, he compared two of the latest premium flagships today by Apple and Google.

Round 1 was a Back Drop Test that resulted to both screens still fully functional. The iPhone rear glass shattered while the Pixel 2 XL only had few scratches on the aluminum at the bottom.

Moving on to the Bonus Round because both devices were still functional, only the Pixel 2 XL was tested. The iPhone 8 Plus recently survived after eight drops onto steel from a higher drop height so it’s only the Pixel 2 XL in this round. This phone reached only until five drops before it rendered no longer functional.