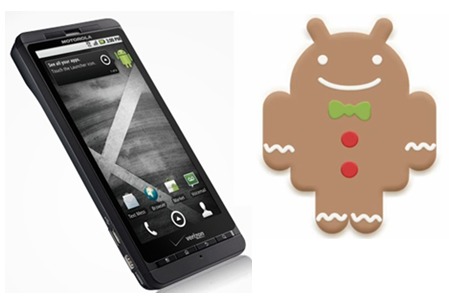 Last week, we reported a rumor that a Droid X Gingerbread update could be coming May 13th after being submitted to Verizon several times for approval. The update had originally been slated for an April release, but that slipped since Verizon wanted a few changes before signing off. The word now is that Gingerbread for the Droid X has been approved and will be coming out as an OTA update as early as Friday, May 13th. So while still a rumor, it takes the next giant step out of the shadows.

A Droid X running Gingerbread isn’t really news. Rooted Droid X owners have been doing it for weeks. But not every Droid X owner can enjoy it without some effort. For those who can’t root and flash their Android handset in their sleep, the official Verizon update will be most welcome.

The update will include user interface tweaks, one touch copy and past, better battery life and Voice Over IP. There will also be new media format support and multiple camera access. So, come Friday, you may want to keep an eye out for the update. Backup your data first, and go to Menu, Settings, About Phone, System Update and then select Download. Make sure your battery is fully charged as well since the update will take at least a half hour or more to complete.

[via Wireless and Mobile News]