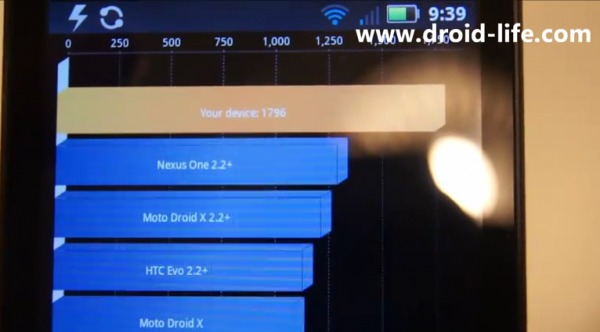 There’s been some benchmarks released of the Droid X running Android 2.3 (Gingerbread) and the results are fairly impressive. The benchmarks were compaired to the previous Android 2.2 (Froyo) results. The tests feature some testing of heavy duty graphics and motion Fx in a game like atmosphere and it received a score of 1796, about a 700 point increase over the Froyo score. That’s around a 30% increase in performance. It’s amazing what a software update can accomplish.

The test was run using the Quadrant Benchmarks app and it’s a pretty impressive boost considering that the Droid X has a 1 Gz single-core with just 512MB of RAM. And considering the build is vs. 2.3.3 which was leaked last week, we can be fairly certain that the tests were conducted using the ROM.