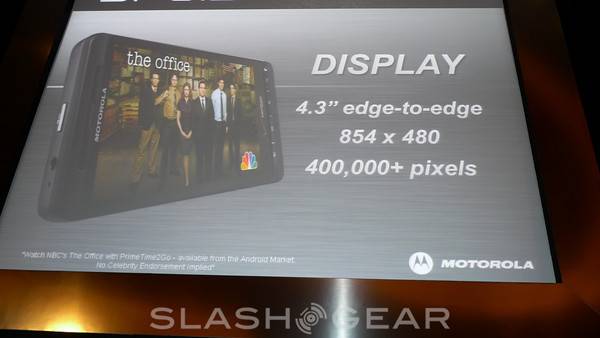 There’s been all sorts of speculation out there. Even leaked image after leaked image. And then some video. But, in the midst of all of that, we never could figure out just what exactly the Droid X was going to feature. A 1GHz processor, yes. A 4.3-inch screen. Yes. And Android. But, so many variables were kept open, that we were all counting down the days until we got some official word about what was coming. And today’s the final day, where Motorola, Google, Adobe, and Verizon have come on stage in New York, talking about the next big thing in the Droid lineage: the Droid X.

The Droid X is official now. And yes, it’s every bit as good as we were all assuming it was going to be. It has a 4.3-inch, 854×480 (400,000 pixels), 16:9 capacitive touchscreen display. It has an HDMI-out port. It has full Flash Player support. Flash Player 10.1, for the record. There is an 8MP camera on the back, which can record video in 720p HD. It is compatible with Windows 7 DLNA. And, there’s a 1GHz OMAP processor powering the whole who under the hood.

There will be 8GB of on board memory on the device, with a MicroSD card slot that can hold up to 32GB of storage. Has 512MB of RAM, and it’s coming with a 16GB MicroSD card in the box. The keyboard is a multitouch-enabled keyboard, and the device has Swype pre-loaded. It has a WiFi hotspot feature, which can connect up to 5 devices simultaneously. The WiFi hotspot feature will cost you only $20 extra per month, so while not breathtaking, at least it isn’t $30. But that could be because there’s a 2GB limit to that 3G hotspot. And if you go over, you’ll be looking at 5 cents per megabyte, so keep track of your data usage, folks. It obviously has GPS, WiFi. But, what about the phone part? Yeah, there’s three microphones on the Droid X. There’s an outward-facing microphone, too, for video. 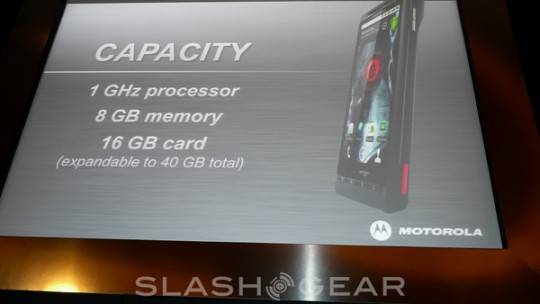 Other features include: Full Exchange support, push e-mail, company directory and security protocols. You can also remote wipe, and have the ability to utilize complex passwords. The battery? You can count it at 1570mAh, which means it should have plenty of juice to get you through (at least) a day. But, if that’s not enough for you, there’s going to be a 1930mAh extended battery made available later in the Summer, sold through outlets like Best Buy, which will add only 1mm thickness to your Droid X.

But, the big question: it will launch with Android 2.1, but then it will get updated to Android 2.2, or Froyo, later this Summer. Stay in touch, because news is still breaking.

Pricing just got announced: you’ll be looking at $199 after a $100 mail-in rebate. Additionally, you’ll need to sign over a new, two-year contract. And, it ships on July 15th. And just below, you’ll find the Droid X’s promotional video.

“Nine months ago, we made a commitment to our customers to bring the openness of Android to the Verizon Wireless network,” said John Stratton, executive vice president and chief marketing officer for Verizon Wireless. “Since then, we have introduced the top-selling Android phone in the marketplace today – the DROID by Motorola. DROID X takes that commitment to another level with exclusive content, faster processing speeds, and, of course, the reliability of our network.”

Sanjay Jha, co-chief executive officer of Motorola and chief executive officer of Motorola Mobile Devices and Home business added, “Motorola designed DROID X to push the extreme limits of Android innovation, and enable you to do even more with your mobile device. We are breaking down barriers so that you can experience the Web the way it was meant to be and create, share and view content like never before, either in your hand or in your home. Enterprise users will also find DROID X appealing with features including push e-mail and live widgets for e-mail and calendar updates.”

DROID X customers will also receive Android 2.2 and Adobe Flash Player 10.1 with an over-the-air update in the latter half of the summer. With the update, the Flash Player will allow mobile users to experience hundreds of sites with rich applications and content inside the browser, including games, animations, rich Internet applications (RIAs), data presentations and visualizations, ecommerce, music, video, audio and more.

“It has been an exciting time for Android momentum and global consumer adoption since the announcement of DROID by Motorola nine months ago,” said Andy Rubin, vice president of engineering for Google. “There are 160,000 new Android-powered devices activated daily and Android Market has grown to over 65,000 applications. Plus later this summer, Verizon Wireless and Motorola will update all the DROID by Motorola phones to the latest 2.2 software. For customers, this means great new features and improved browser performance. For developers, this will provide new tools such as cloud-to-device messaging and enhanced enterprise functionality.”

“We are excited about full Flash support coming to the DROID X and other devices from Motorola,” said Shantanu Narayen, president and chief executive officer of Adobe. “Flash Player 10.1, which is one of Adobe’s most anticipated releases ever, has been redesigned from the ground up to deliver the kind of highly engaging experiences that consumers now expect from their mobile devices.”

Once updated to Android 2.2, business customers will find DROID X offers the features that turn the device into a workhorse with support for both Exchange and Gmail™ for business. Corporate users can enjoy push delivery of e-mail; live widgets that stream messages to the home screen; filter widgets to differentiate work and home e-mail; corporate directory and Global look-up along with a unified calendar for Enterprise and sync with Google Calendar™. Security protocols allow remote password control and wipe via Exchange server.

DROID X by Motorola will be available at www.verizonwireless.com and in Verizon Wireless Communications Stores beginning July 15 for $199.99 after a $100 mail-in rebate with a new two-year customer agreement. Customers will receive the mail-in rebate in the form of a debit card; upon receipt, customers may use the card as cash anywhere debit cards are accepted. In addition to subscribing to a Nationwide Talk plan or a Nationwide Talk & Text plan, customers will also need to subscribe to an Email and Web for Smartphone plan. Nationwide Talk plans begin at $39.99 monthly access. Email and Web for Smartphone plans start at $29.99 for unlimited monthly access.

Customers can add the optional 3G Mobile Hotspot service to their DROID X for $20 per month. The 3G Mobile Hotspot allows customers to turn the phone into a wireless modem for up to five compatible Wi-Fi devices. In addition, current Verizon Wireless customers who have contracts ending by December 31, 2010, can upgrade to any smartphone, including DROID X, without penalty.