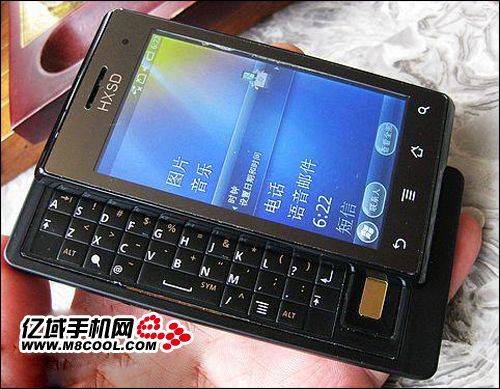 They say imitation is the best form of flattery, this doesn’t fall under that motto. It’s an utter disgrace to see such a vile piece of electronic garbage. Well, maybe it’s not that bad but it is a waste of electronic hardware. A company in China has just made a Motorola Droid clone that runs Windows mobile.

The usual clones often come as iPhone knockoff, looks like android devices are the new target. It does look like its built pretty good and may be a very solid handset. It appears to have a front facing camera which the real Droid doesn’t. Unfortunately, the keyboard looks worst then the Droid keyboard, if you’re going to imitate you should at least try and improve on the hardware design.

It’s actually not too far off as far as specs go. It has a 533 MHz Huawei processor instead of the 550MHZ in the Droid. It has the exact same RAM as the Droid, 256. If you love Windows Mobile 6.5 but want the look of what is probably the most popular Android device, this may be the handset for you.