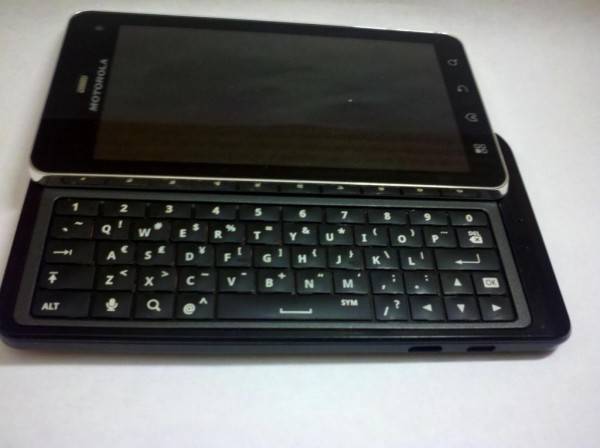 Photos have leaked of what is reported to be the new Motorola Droid 3 sporting a redesigned keyboard. The slide up QWERTY has five rows, rather than the smaller 4 row design featured in the Droid 2. The buttons look fairly large for typing and it’s an impressive outlay considering the phone shown looks fairly thin. There also looks to be HDMI and microUSB ports as well.

But other than that, there isn’t really much to go on. It looks to have a stock 4″ TFT screen, and if were can infer anything from the previous Droid 2 specs and the current state of the Android art, we can probably expect top maybe go up to a qHD screen. And since the Droid 2 runs a Froyo flavored OS, it would certainly need to run Android 2.4 (Gingerbread) at the very least.

Other possible specs to dream about …. maybe maybe boosting to dual core for that 1Ghz processor? Replacing the 5MP camera for a a 8MP camera with full HD recording? Or jump on the dual camera bandwagon? That doesn’t seem likely since the images don’t really show a front facing webcam for video chat. At the very least we’d also expect 4G/LTE connectivity. What would you like so see?