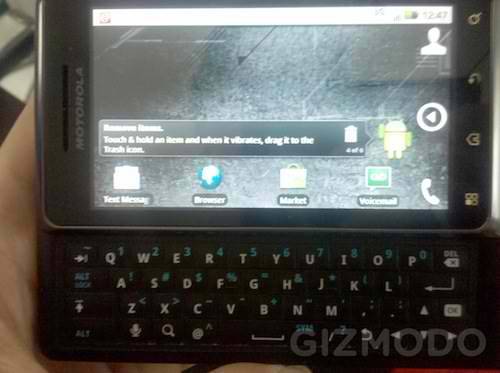 If the upcoming keyboard-less Motorola Droid X isn’t your cup of tea, Verizon has you covered with the next incarnation of the Droid. This time around the Droid 2 was spotted at the Jet Propulsion Laboratory (NASA). Gizmodo had a spy planted at the event and he was willing to give us all his first impressions of the device.

Apparently, the new version of MotoBlur that is currently on the device may be replaced with “vanilla” Android. This may be good news depending on how you feel about the stock OS. If it does get replaced, the tipster said Moto will opt for a Froyo install and get rid of MotoBlur completely from this handset.

The 1GHZ processor, 8GB of internal memory and an 8GB microSD was confirmed to all is there at launch. Also, the keyboard is said to be leaps better than the original with bigger keys and better key placement. This should be another good one from Motorola and Verizon, stay tuned, more information on this handset will surely be leaked soon.