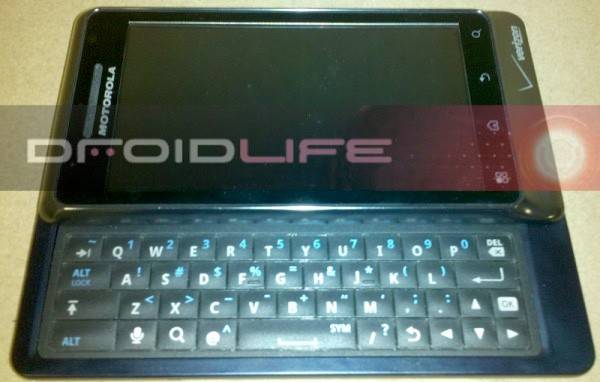 Up until now all we’ve seen of the droid 2 is a blurry picture that didn’t even show the entire front of the device. Now we finally get a clear look at the full handset. There’s even a video of the boot screen and you can clearly see that it has a full QWERTY keyboard. It looks almost identical to the original droid that we all know and love.

The keyboard has been upgrade to what appears to be a bigger version of the Cliq’s keyboard. Thankfully that dreaded d-pad is gone and the keyboard has a 4 rows. This is a huge improvement over the original. It also looks like it a bit thinner then the original.

It has a 750MHz OMAP, a 3.7 inch touch screen and 8GB of internal. There will also be a preinstalled 8GB microSD card bringing the grand total to 16GB. There’s a 5 MP camera, it likely has an LED flash. Contrary to the early rumors, there’s no HDMI port and it runs Android 2.1. It’s a possibility that it will get 2.2 by the time it’s released but that’s unlikely.