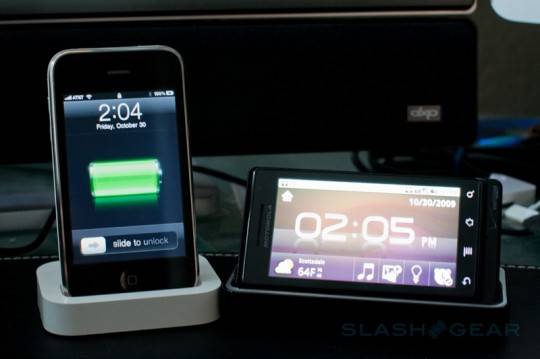 I know this one is going to hurt those who drink too much iDon’t koolaid, because they never, in their most wildest dreams thought about any other phone beating the iPhone. But it happened, TIME announced their “Top 10 Everything of 2009″ list, and the Motorola DROID ranks on number 1, and the iPhone 3GS took number 4 on the gadgets category.

As a matter of fact, the Barnes & Noble nook is the device that took the second place, and Dyson’s Air Multiplier bladeless, nonbuffeting fan took third place. Now, as we all know, many upset iPhone followers will not believe this, but who cares now. Do you? TIME, of course, is just one magazine saying this, for now anyway, there might be more coming down the pike.

Next, for your reading pleasure, is what TIME had to say about the DROID and the iPhone:

1. Motorola Droid
Everybody likes Android, Google’s open-source smartphone operating system. But a smartphone operating system isn’t all that satisfying without an actual kick-ass smartphone wrapped around it. Now Android has one: The Droid is a hefty beast, a metal behemoth without the gloss and finish of the iPhone, but you don’t miss it. The Droid’s touchscreen is phenomenally sharp and vivid, it has an actual physical (not great, but good enough) keyboard, and best of all, the Droid is on Verizon’s best-of-breed 3G network. It’s Android’s first credible challenge to the iPhone. Price: $300.

4. iPhone 3GS
Take the iPhone. Make it faster. There, you’re done. Yes, the 3GS has a better camera — with video. And it has a compass and voice control. Those are all improvements over the original. But the main point of, and the best thing about, the new iPhone is speed. It has more of it. Period. Price: $200 to $300.