With the demise of the Sony Update Service software, it seemed that all Sony Xperia handset users were doomed to use PC Companion, which is now Sony’s only recommended software for getting firmware updates. So it is relatively a good thing that software like XDA Senior Member IaguCool’s XperiFirm is available for when you want to get the current firmware for your Xperia device officially from Sony servers without hassle.

Official interface software tend to be bloated with features that consumers won’t normally use, and for one, that equates to a pretty heavy download and installation that you wouldn’t normally acquiesce to (but then you have to). That is unfortunately the case with Sony’s PC Companion, and that was why the SUS software was so famous with Xperia users, until recently when Sony announced that it was killing off support for that specific software.

XperiFirm was developed not really in SUS’s mold, but certainly in the spirit of giving Sony and Sony-Ericsson device users a hassle free search for current firmware. XperiFirm searches Sony’s online servers for the latest firmware available, and only the ones that exist on Sony’s servers. From there, users can pick which one they want and download it through the app, and then decrypt it to output an easily usable FTF file (Xperia users should be familiar with this). 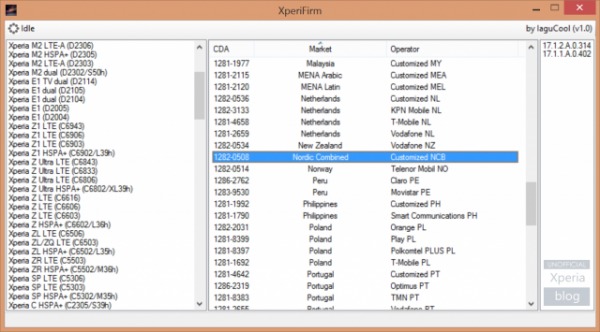 There is more information about the app from its original XDA thread here. Initially, the app requires that your PC be running Java Runtime Environment and Microsoft .NET Framework 2.0 or better. Look for the download link via the source link below, and also check the original XDA theread if you have any questions.