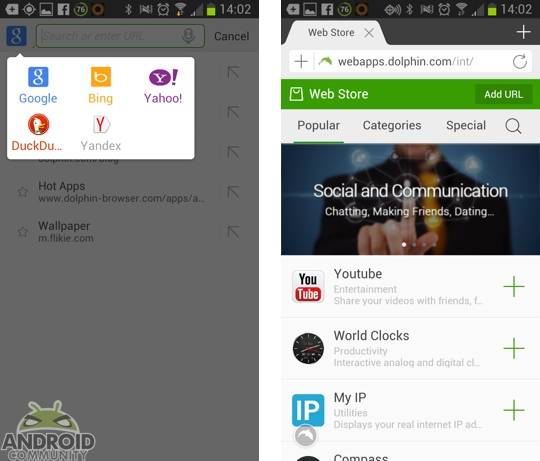 Version 10 of the Dolphin Browser has arrived in the Google Play Store and it brings quite a few new features. There is an updated user interface, some improvements to search and something called the Dolphin key. Of course, those are just a few from a list that also comes along with news of the browser having reached a new installation milestone. The Dolphin Browser folks have said the browser has now been installed 80 million times.

With that in mind, they are calling Dolphin Browser v10 the “most intuitive” yet. The user interface portion of the update deals with simplicity. The update is said to have brought a simplified look as well as streamlined access to the key features. Moving forward users will be able to access the browser menu and tab list as well as the Gesture and Sonar features with a single swipe, this is the Dolphin key.

Shifting over to the customization options and some of this is dealing with the newly added Dolphin web app store which will allow you to add app shortcuts to your homescreen. The list has more than 200 web apps and it looks like the expected items such as Facebook, Twitter and more are included. Basically, this setup will be similar to the homescreen on your device in that you can arrange and organize apps including tucking some away in folders.

Some of the other improvements deal with search and Flash. The search is said to have been made faster and smarter. Or more to the point, users will be able to search using the URL bar with the option to choose where — Amazon, Twitter, Wikipedia, YouTube, or Facebook. The browser will allow allow you to choose between five search engines including Google, Bing, Yahoo!, DuckDuckGo and Yandex.

As far as the Flash support, this has arrived by way of the Adobe Flash player app. Users will also need to turn on Flash support in the settings. Bottom line here, this means you will be able to browse and watch YouTube videos without having to leave the Dolphin browser. And lastly, the Themes and Night Mode have been updated and the latest versions can be downloaded from the Google Play Store — just like Dolphin Browser v10.