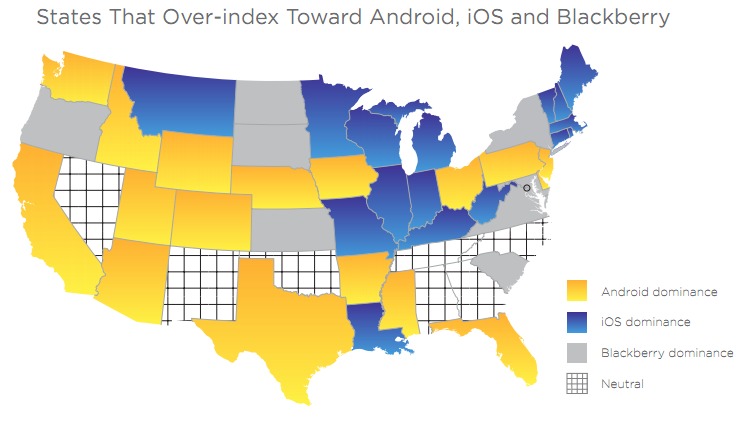 Forget red and blue states. Mobile advertising firm Jumptap has a lovely infographic that shows us the majority we really care about here, most dominant smartphone OS of course. The chart highlights each state showing whether Android, iOS, or Blackberry is the most dominant (or if there’s a tie).

The image above was created to aid companies looking to target their advertisements to a specific OS depending on region, but we will use it for a more important purpose. For instance I’m extremely disappointed with my beloved, and so often down to earth Mid-West, who clearly isn’t so great at choosing smartphones.

Jumptap points out that the south and the west coast favor Android. Is it ironic that this includes the Apple mothership in California and seat of Microsoft’s power in Seattle? Either way I’m laughing. Those silly east coasters and the mid-west seem to have poorer judgement voting against freedom, flash, and expandable memory!

For the record, a quick check thanks to Wikipedia and a calculator shows the people have spoken, loudly. According to the electoral colleges of the United States of America, Android is the best OS by a landslide of 245 electoral votes to iOS’s 134 and BlackBerry’s 83. Note these numbers may not be exact, but as an engineering student, I’ve been told I’m decent at math.

What do you think of the map? Is your state the color you expected? And remember even if it wasn’t, your vote (with your wallet) counted! Hail to the chief!