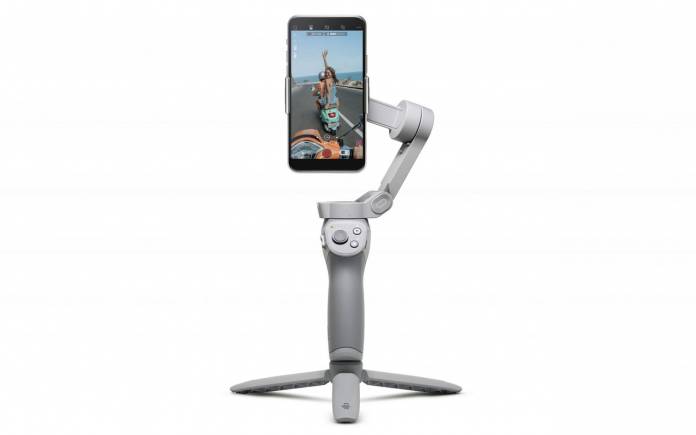 Nothing is official yet but the DJI Osmo Mobile 4 has just been leaked. We can expect an official launch soon once everything is ready. DJI knows the gimbal business and it is upping up the ante with a new product. The DJI Osmo Mobile 3 needs a follow up. The time is right as it was introduced August last year. It can be assumed the next version is about to be announced. The DJI Osmo Mobile 4 may look similar to the previous model but with significant improvement.

The DJI Osmo Mobile 4’s photos have been leaked. We find that the accessory comes with a magnet so you can easily mount a smartphone to the gimbal. It makes mounting easy and quick all the time.

We see a clip and a ring that you can use. The gimbal also comes with a 2450mAh battery, Bluetooth 5.0 connectivity, and USB-C. The battery is enough for it to last up to 15 hours of usage on a single charge.

The magnetic mounting mechanism has been shown off by Roland Quandt of Winfuture. It’s a trailer for the upcoming DJI Osmo Mobile. When not in use, you can fold up the device that weights only 390 grams.

Other special features of the DJI Osmo Mobile 4 include a Dynamic Zoom, 3-axis stabilization, panorama, gesture control, and Activetrack 3.0 capabilities. The Dynamic Zoom looks exciting as it lets you zoom on the subject as the camera is moved away further.

The DJI companion app is also updated. It will feature a story mode that allows you to make films using the video footage capture. The price could be around 150 euros in Europe or around $177 in the United States.