Despite the fact that DirecTV has had an Android app available for some time now. And not even counting the bit about them having an app available for the iPhone and iPad — they have finally released a tablet intended for Android users. The app, which is dubbed DirecTV for Tablets can be found in the Google Play Store, however some Android tablet users may not be able to use the app.

Before we get into that point, lets take a look at what DirecTV for Tablets does offer. The support includes Android devices running 3.1 or later and the features include streaming as well as the ability to browse the guide and remotely control your DVR. The app also has a remote control that can be used to replace your current stand-alone remote. The app also allows for some customization. For example, you can create a favorite channel list and also add, remove and reorder the modules. These modules include Live TV Streaming, Currently Watching, Channel Guide and more.

So far things seem to be looking pretty good in terms of the DirecTV for Tablets app. In fact, based on the Google Play Store screenshots and comments, it seems pretty good. In fact, one user had called the app a “gigantic improvement compared to the other DirecTV app.” Here comes the issue though, this app does not offer support for one rather popular Android tablet. 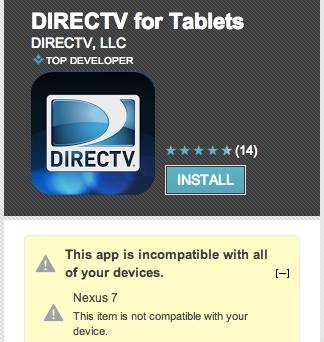 As you can see from the above screen capture, the Nexus 7 is not a supported device. We are not entirely sure if the folks at DirecTV think the Nexus 7 is actually a smartphone, of if this was simply an oversight. In the meantime, those rocking a Nexus 7 will be stuck using the original DirecTV app, which is intended for smartphones.