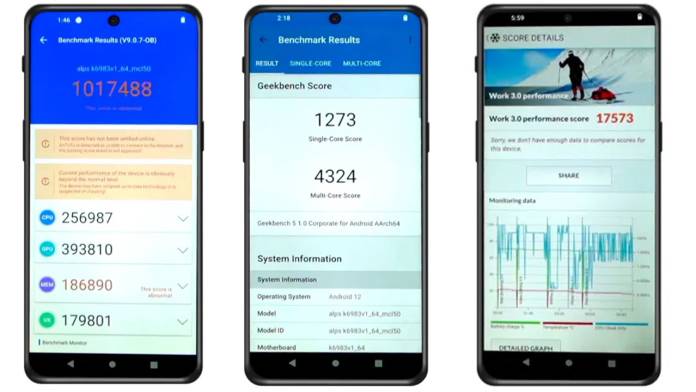 MediaTek has grown from strength to strength in the last year or so, showing the world how it can take on market leaders like Qualcomm. The Chinese chipmaker has again broken the ice with its latest and greatest flagship for mobile devices, and it sounds promising. Yes, the Dimensity 9000 processor is here, and it is destined to show up on a number of devices debuting next year. MediaTek is confident about the chipset and that’s why it has released a video demonstrating its abilities on benchmarking tests like AnTuTu, Geekbench, PCMark, and more.

Taking the battle on directly to its major rival Qualcomm, the new chipset scores high on the CPU scores but falls behind a bit in the GPU tests. That said, both these margins are not very stark and only marginal.

AnTuTu is the first test run on the Dimensity 9000 SoC where it scores an impressive 1,017,488 points which is close to the Snapdragon 8 Gen 1 processor’s score. Just for comparison, the Realme GT2 Pro went through the same test a few weeks ago breaking the 1 million point barrier.

Moving on to the Geekbench 5 tests, the MediaTek’s chipset gets 1273 points on single core and 4324 on multicore testing which indicate capable performance for single core and exceptional for multicore. The reason is, Galaxy S22 Ultra/Note on the Snapdragon 8 Gen 1 got scores of 1219 and 3154, which is well below the 4000 milestone that MediaTek cracked here.

Moving ahead to the PCMark benchmark, Dimensity 9000 scored 17573 points on the Work 3.0 performance test. Again, this is higher than the flagship Snapdragon 8 Gen 1 SoC which managed 16858 on benchmark test earlier in the month.

Things are surely looking good for MediaTek camp as they are able to match Qualcomm with their chipset; in most cases, even bettering the Qualcomm chipset. Will the Dimensity 9000 SoC prove to be a handful in real-life performance running on 2022 phones like Redmi K50, OPPO Find X, and Realme GT2? Well, we are hopeful it will come good on its promise by these early indicators!