As mobile usage continues to ramp up in various markets, more and more apps and products are clamoring for our attention. And because the market is getting crowded, a lot of companies and developers will continue to use various user acquisition methods. Sadly, various entities engaged in this industry will also result to fraudulent means to get clients. An ongoing study by Venture Beat shows that the number of advertising fraud has already almost doubled this year, and is expected to increase as the months go by.

There are various ways of acquiring new users for whatever product you’re pushing, like content, social media, app store optimization, mobile advertising networks, etc. But not all the players seem to be legit, as 58.8% of developers say that they have been cheated in one way or another. This is a big leap compared to 2014 when only 34% of those surveyed admitted that they were defrauded. The increase isn’t really a big surprise given the highly competitive industry that mobile has become. 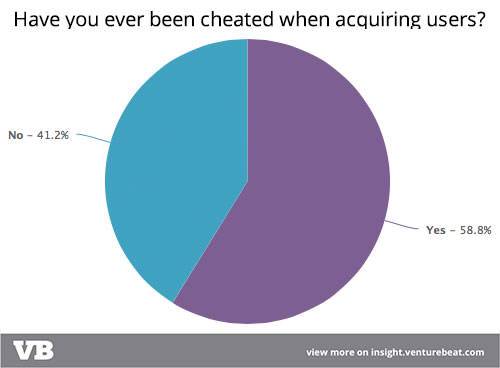 Advertising and promotions cost has greatly increased in user acquisition, with each user costing around $3 at a minimum, and some even having to pay as much as $8-$25 per “qualified and quality” user. But that kind of money also invites various fraudulent means, including bots, invisible ads, stacked banners, “tricky” links, install farms (mostly involving overseas labor), etc. You would think you’re getting the numbers you want/need, but in fact, some of these networks are just tricking you into wasting that ad & promo money.

A Mobile Advertising and Brands report also by Venture Beat showed that almost $6.3 billion has been attributed to digital advertising fraud, and a little over a quarter of that concerns mobile. The 2015 study is still ongoing, with 6 more months to go this year, and currently, over 500 mobile developers and publishers have joined. Hopefully, they’ll get more data to give us a clearer picture.