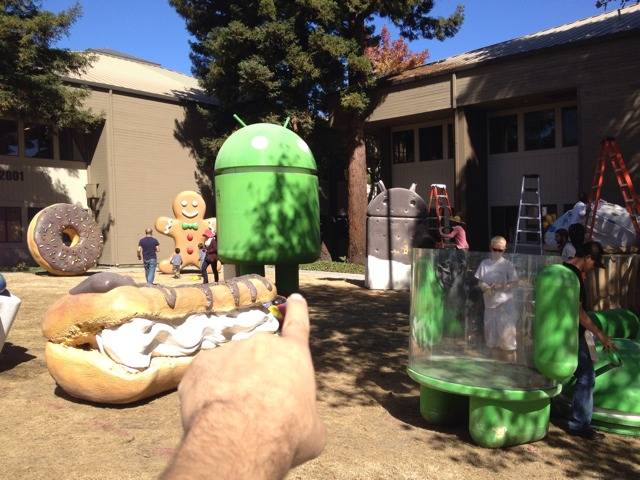 It’s either he’s the most obvious “teaser” out there or he’s giving us another red herring. Google lawn artist (yes, there’s such a thing!) Giovanni Calabrese has been leaving licorice hints all over his G+ page, just ahead of his visit to the Google HQ in San Francisco. He is now working on retouching and refurbishing the lawn sculptures, probably in preparation for the official announcement of the latest Android version and the probable unveiling of the new Nexus phone, rumored to be later this month.

Calabrese has been talking about licorice the past few days. It might be his favorite sweet, or as we said, he might just be giving out a red herring because surely Google must not be letting him get away with such obvious remarks if that was indeed the name. Guessing the dessert name of the latest Android iteration has become a fun game among observers. Much speculation has been spreading about the actual name of Android L, with Lollipop and Lemon Meringue Pie being the front-runners.

Probably, Calabrese does know what the official name is, given that he has to have enough time to come up with a lawn sculpture for Android L, just like he did with other previous updates like Gingerbread, Jellybean, Kitkat, etc. His visit to the Google HQ may have something to do with that, although the official “cover story” is that he needs to refurbish the existing lawn sculptures. He even made a call-out on G+, asking for volunteers to help with the repainting and retouching.

The highly anticipated Android L release is expected sometime later this month. It will be bringing many updates, including the Material Design which is being applied to various Google products the past few weeks. A new way of reading and interacting with notifications and the further integration of Android and Chrome will also be among the new features to be expected with Android Licorice. Wait, we mean, whatever the L is.