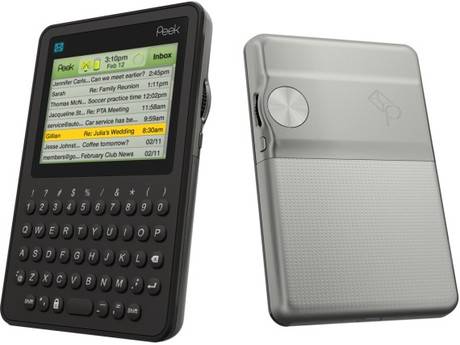 If there’s one thing the Android development community can’t resist, it’s a cheap mod platform. The Nook Color and (eventually) the HP TouchPad both owe their legacies to budget-conscious Android users looking for something to mod. The latest platform for cheap hacking might just be the Peek, a single-function device built for SMS on the cheap. The company is going out of business, but The Verge reports that CEO Amol Sarva wants to give the thousands of unsold units to hackers, hoping that “maybe somebody can build something great”. At least one member of the Reddit Android section has the idea of porting Android to the device – a familiar rallying cry.

For those who are unfamiliar with Peek: it’s a small BlackBerry-style gadget that’s built for text messaging and email, and nothing else. The single-purpose Peek was sold for less than $100 and used cheap service without contracts as a hook for those who needed to stay connected without the use of a phone. The hardware is pretty bare-bones, but includes a full QWERTY keyboard, GSM connection, side-mounted scroll wheel and 2.5-inch 320×240 display – not that much smaller than a lot of cheap Android phones, though it’s unfortunately not touch-enabled. Peek worked with a variety of email services, including POP3, IMAP and Exchange.

Can any of the Peek devices run Android? It’s hard to say. Getting the hardware itself to boot a different operating system wouldn’t be that difficult, but according to the Wikipedia page, the Peek’s processor is a mere 100mHz and the storage space is a measly 8 megabytes. It would be a challenge for even the most talented Android ROM developer to get Android to fit on the device, to say nothing of it running properly. The Peek has no expandable storage, so getting it to hold more data would require some hardware modifications. Still, if anyone can do it, Android modders can. If you’re up to the challenge, contact CEO Amol Sarva at amol@peek.ly to get in touch with one of the company’s developers.