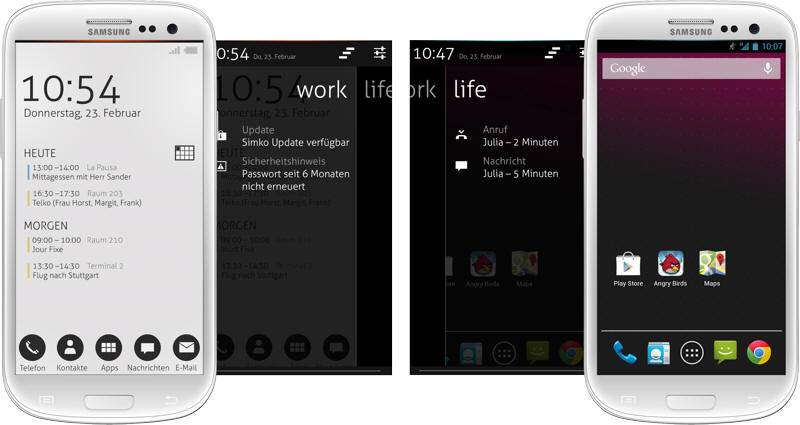 German telecommunications company Deutsche Telekom has just revealed that their latest high-security phone, the SiMKo 3, has just been given a thumbs up by the German Federal Office for Information Security (BSI). And one of the first customers of such a device that focuses on protecting mobile communication might be the German government itself.

SiMKo 3 is a smartphone based on the Samsung Galaxy S III and includes a new, lightweight L4 high-security microkernel that enables the phone to practically run two operating systems seamlessly. Once the phone boots up, the SiMKo kernel quickly takes control of the phone and runs a secure and restricted environment that protects sensitive work-related data. But a simple swipe of the screen switches the user to the regular Android system for more personal uses. Data on the two systems are not mixed to ensure tightened security and integrity.

The SiMKo 3 phone was just approved by the German BSI and given a security level of VS-NfD or classified information for business use only. Although it is the lowest security level, it will enable the phone to be used in federal government offices as well as businesses who provide smartphones to allow employees to access company data from anywhere. Deutsche Telekom is in the process of developing additional security features such as encrypted phone calls based on VoIP technology, implementing the government’s Secure Multi-Network Voice Communication standard, and remote wiping of confidential data in case of loss or theft of the device.

Deutsche Telekom is selling the SiMKo 3 smartphone for 1,700 euros, roughly $2,255, with a two-year contract. The company is also already working on an LTE-capable variant as well as other SiMKo-powered devices such as tablets and laptops.