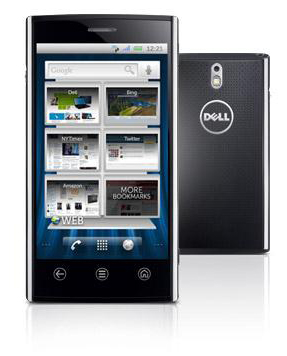 Have you been waiting for the Dell Venue? No? Maybe it’s because Dell has done essentially no advertising of the phone whatsoever? Let’s talk about this phone for a moment, then we’ll speak about how it’s just become available for purchase through Dell today. It’s got a 4.1-inch WVGA AMOLED capacitive multitouch display, a generous 8 megapixel camera on the back, three navigation buttons on the bottom instead of four – reminding you that Honeycomb, again, may reach smartphones after all, and it’s running Android 2.2 Froyo.

Also, the Dell Venue has a 1GHz QSD 8250 processor, the display is 800×480 pixels in resolution, has a 1400 mAh battery, weighs 164 grams, and has the following connectivity options: Sync to PC, USB Mass Storage, USB Support, Wi-Fi, AGPS; Bluetooth ® 2.1 EDR, A2DP, and AVCRP. Also there’s a Micro-USB port, a 3.5 mm headphone jack, and a potential 32GB of storage with micro SD — with curved Gorilla Glass on the front.

And it’s unlocked! You can have this phone on any carrier you like, and it’s Dell so you know you’re going to love that if Dell’s your thing, and it costs $499.99. Sound like your kind of deal? Grab it [HERE] This phone ships February 18th, 2011. — thanks for the tip, SpiceMonkey!