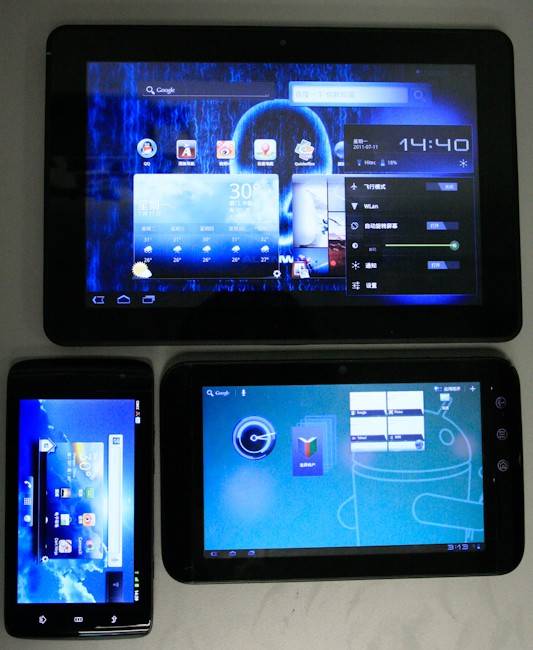 Dell’s third Android tablet looks to be taking shape and getting ready to see the world. Today it appeared for a real live photo not just a rendered image like we saw in May, today we get to see the real thing. Sitting comfortably with his older yet smaller siblings the Dell Streak, and the Streak 7.

Update: Even more interesting is the photo above seems to show Honeycomb running on the Dell Streak 7 too, either that or a new 7″ version that could be coming to market. Interesting photo because that would make it Android 3.2 on the Streak 7.

The Dell Streak Pro 10″ is just like most tablets at the moment. Running on Android 3.0 Honeycomb as we can clearly see in the photo. It will feature a 5MP camera on the rear and 2MP on the front, 10″ 1280×800 resolution screen with that all powerful, all knowing NVIDIA Tegra 2 dual-core CPU speeding in a 1 Ghz.

Last we heard it should be shipping to stores in China starting next week but we still have nothing regarding a price, or a U.S. launch. The Streak 7 didn’t do that well with the low resolution screen and what not and it was right before Honeycomb started making a big impact for buyers.

Most likely we will see this device in the States eventually but for now that is still up in the air according to Dell. Hopefully we get more pictures and a full list of details to update with shortly.