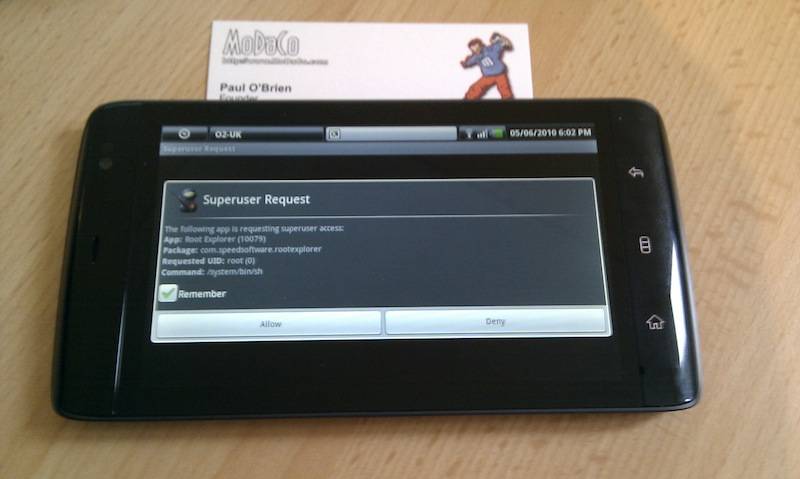 The answer is yes, it has been rooted. Paul, better known as Modaco, has done it again. Shortly after being released in the UK, he has managed to root the Streak in seemingly record time. This tablet was just released yesterday and it was rooted the same day. At least this time the product actually made into the market. He rooted a few handsets before they was even released to the public.

If you’re in the UK and you have a Streak, thanks to Paul you can now unleash its full potential. There’s currently no custom ROM’s to flash but there are a few apps on the market that can add extra features to your newly rooted Streak. Paul will surely have a ROM released in a few. Instructions on how to root it yourself should be up shortly, stay tuned.

Superboot is a boot.img that when flashed, will root your device the first time you boot (installing su and the superuser APK by ChainsDD). No need to flash the system partition, no need to use ADB, no messing with the contents of your data partition, no overwriting the shipped ROM on your device, just flash the boot image using the instructions below and you’re done!

The story behind this superboot is a little bit different to what has gone before… normally a Superboot is created based on a leaked ROM, but this wasn’t possible on the Streak. What happened in this case is that I managed to find an exploit to give me root, which in turn allowed me to dump the device to images and create a Superboot image. This can be flashed because the Streak has a relatively open bootloader. This is pretty handy because it means that I don’t have to reveal the root exploit… potentially saving it for further down the line if Dell choose to lock down the device a bit more.

APPLY THIS AT YOUR OWN RISK!

Before download, you should check your device ‘about’ screen to determine which build number you are running. Although the Superboot may work on other builds than that for which it was designed, I cannot guarantee that!

How to use Superboot – Windows, Linux and OSX

Note: Be careful what you do now you have root!  We don’t as yet have a recovery image or recovery flash (but will soon), so if you badly break it, you might have to wait for a bit.