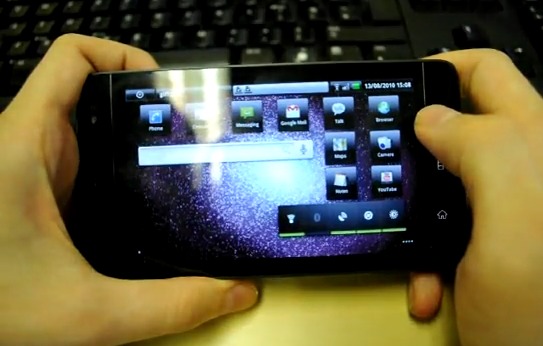 When the Dell Streak was announced, there was plenty of speculation about what Android version it would come with, once it finally made its way to the market. All of that got figured out, and there was talk about upgrades right off the bat. Engadget managed to get their hands on some exclusive time with the latest update to the Dell Streak, Android 2.1, which is set to be released for O2 branded Streaks next month, and thankfully it’s bringing more to the table than just some Live Wallpapers and a new unlock screen.

While there is obviously support for Live Wallpapers and that new unlock screen, there is also some much needed changes to the overall device. For example, and probably one of the biggest changes for the better in the update, is the new keyboard. You won’t find the number pad and caps lock key anymore, which provides just enough space to the keyboard to make it, apparently, a lot easier to type on. Other changes outside of the keyboard include the Android 2.1 Gallery application (like the one that the Nexus One showed off), and you’ll now be able to link to Picasa. And, perhaps the best news for some, the camera can now capture 720p HD video.

Let’s cover the bad things real quick, before we wrap this up. We know everything can’t be rosy, after all. Dell apparently decided to change the way that icons lay on the homescreens, as you were previously able to have 32 at a time, but now thanks to them arranging them in a more horizontal fashion, you can only put 24. Also, they increased the size of their proprietary News and Music widgets, making it so you can’t have two of those on the same homescreen. And worst of all, the homescreen switcher to a “Recent Applications” list, which means you don’t have a quick way to move from one homescreen to another anymore. Not a deal breaker, perhaps, but still annoying enough. Check out the video below for a bit more in depth look, and let us know if the Dell Streak is still on your radar.