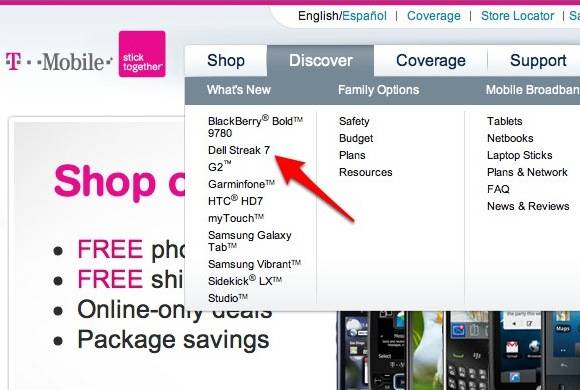 T-Mobile‘s site has been quietly updated to mention the Dell Streak 7, which has now been added to the Discover drop-down menu. Spotted by TmoNews, the link itself leads to a 404 page, but it’s more evidence that the 7-inch Android tablet is fast incoming.

The Dell Streak 7 is expected to include both T-Mobile and AT&T 3G support in a single version, as well as having NVIDIA’s Tegra 2 chipset, WiFi b/g/n and Bluetooth 2.1+EDR. T-Mobile is holding a media event at CES 2011 this morning, so the Streak 7 could well make its official debut there.