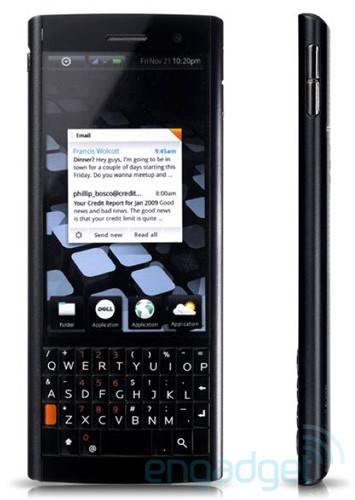 Dell has a lot of new different Android devices entering the market late this year and early next year. This one is called the Smoke, it’s like a slim Blackberry mixed with a Pixi. This device will be targeted towards corporate customers but the appeal of this phone will widen if Dell sticks to their plans of offering this device at a low price.

Features:
• 2.8-inch QVGA display
• Qualcomm’s next-gen MSM7230 processor at 800MHz
• 5 megapixel autofocus cam
• 14.4Mbps HSPA
• MicroSD expansion to 32GB
• Wi-Fi, Bluetooth 2.1 + EDR
• Dual-mic noise canceling
This phone is also scheduled for a 2011 release, sometime in the second quarter. The carrier has not been announced but it seems as though Dell has a deal with AT&T to carry all of their Android devices. Hopefully AT&T will wise up and stop messing up their Android phones by then.