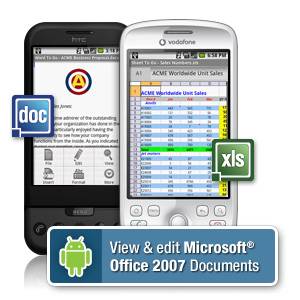 DataViz have launched a version of their Office file editing app Documents To Go for Android.  Promised back in December, Documents To Go can open Microsoft Word and Excel files and attachments, as well as allow editing and creating of them, up to and including Office 2007 files.

Rich formatting is supported, such as bold, italics, underline, font color, alignment, bullets and numbered lists, together with tables, bookmarks and comments. Documents To Go will also display footnotes, endnotes and track-changes, while the Excel part of the app supports a full 111 functions, together with cell formatting, row and column preferences and auto-fit options.

There’s also integration with DataViz’s new RoadSync Beta, which brings Exchange ActiveSync push email to the Android platform.  Currently a free beta in the Android Market, RoadSync supports both email and Exchange contacts.  It’ll be free until May 31st; full pricing is yet to be announced, but as a guide RoadSync is priced at $29.99 for PalmOS and $49.99 for S60.