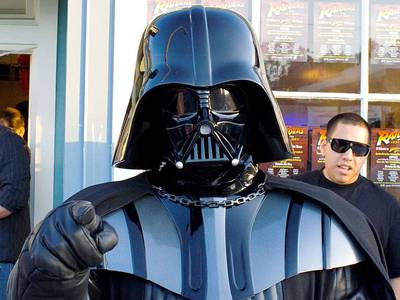 Star Wars has already tied up with Android in the past with R2-D2 on one of the Droid smartphones. That was a cool mash up of my childhood heroes and tech. A strange one has surfaced now in Japan.

Apparently, NTT DoCoMo has chosen Darth Vader as its spokesperson for Android in Japan. The company is the largest carrier in the country. Perhaps it sees itself as the Evil Empire. I have to wonder if Vader has different connotations in Japan than here in the US.

Yeah I don’t get the commercial, Vader is just sort of standing around and even creepier is Vader at the disco. I think the message is the evil empire is watching you. This is really weird.