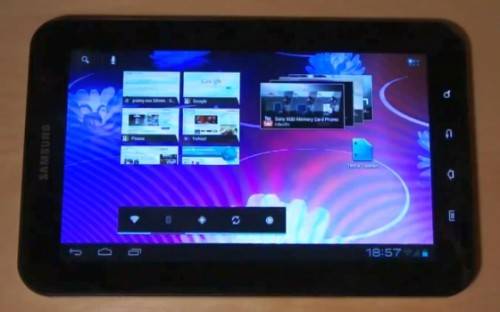 While Samsung went back and forth regarding the original Tab and its possibilities for an upgrade to Android 4.0 Ice Cream Sandwich, that hasn’t stopped developers from diving in head first to port the latest from Google to the slate. We’ve seen a few ports running on the original Galaxy Tab but today we have something even better — CyanogenMod 9 booting up and running great.

Ports are one thing but a build by CyanogenMod makes this even better. The folks from Netbooknews took it for a spin and while it’s not quite complete or fully stable, it looks great so far. This appears to be Android 4.0.1 Ice Cream Sandwich and not 4.0.3 but I’m sure that will come in due time.

Obviously the Galaxy Tab is a bit old and only sports a 7″ 1024 x 600 resolution display and a single-core 1.0 GHz processor but things seem to be chugging along great. If the Nexus S can run it fine, the Galaxy Tab should too even with the larger screen.

According to the awesome folks over at the XDA thread just about everything works so far, although it still needs a little bit of work. WiFi, Bluetooth, touch, and everything else seems great although they still have a few issues to work out with the camera and overall performance.

It’s a great start for CM9 that is for sure. Hit the XDA link above to get started yourself.