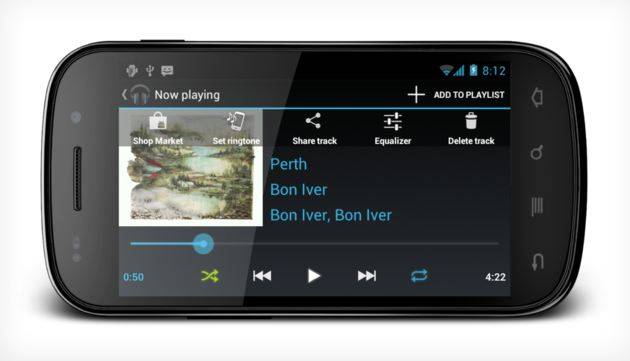 The CyanogenMod family of custom ROMs has always been popular for its speed, stability, and not least its tweaked additions to the core Android experience. You can get a taste of CyanogenMod 9, the Ice Cream Sandwich release, with the customized Trebuchet launcher app. But that’s certainly not the only thing Steve Kondik and his army of coders is cooking up. The new ROM will have a brand-new Music player app, with a considerable amount of extra functionality.

The new music app springs from the one found in Android’s AOSP code, not to be confused with Google’s proprietary Music app that you can download from the Android Market. While the core app is perfectly serviceable, it’s always been a little bare-bones, and in previous releases CyanogenMod added some visual and functional tweaks. But in CM9 they’ve outdone themselves, incorporating features from a handful of popular third-party alternatives to make a truly excellent built-in player.

The interface gets the most attention. An exciting new feature is the “Shake” function, which utilizes the accelerometer to perform user-defined actions. By default it can be set to advance to the next track when you shake your phone or tablet. You’ll be able to customize the controls that appear in the notification area (the ICS Music app defaults to play/pause, back and forward), integration with the Music section of the Android Market, and a custom theme engine independent of Android and CyanogenMod.

Unlike Trebuchet, you can’t try this one out just yet. I just happened to try out a modified CM9 ROM today, and unfortunately it looks like the new music app hasn’t made it into the source code just yet. But there’s good news for non-modders: developer Andrew Neal says he’ll be releasing the app independently on the Android Market (presumably for free) so that everyone can have access to the new features. The official version of CyanogenMod 9 is expected to be available in January or February, but don’t ask them for an ETA.