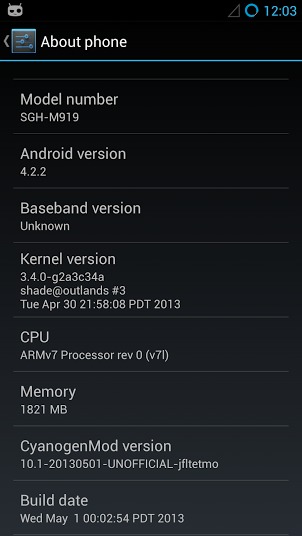 This is exciting stuff. We have an influx of excellent news for all you readers planning to get the GALAXY S 4. Just days after reports surfaced that AT&T’s GALAXY S 4 had a locked bootloader, it has already been cracked. Now this morning it also looks like one of the most popular and exciting custom ROM’s in Android, CyanogenMod, should be supporting the device. Check it out below.

What we have above is a screenshot from the one and only Steve “Cyanogen” Kondik already running Android 4.2.2 Jelly Bean and CyanogenMod 10.1 on his GALAXY S 4. For clarity, this is on a T-Mobile version, and not the recently unlocked and hacked AT&T flavor. That doesn’t fully matter though, this is CM on the S4. Yay!

It looks like development has fully begun and is in overdrive, because he has this up and running rather quick. A post over on Steve’s Google+ page mentions everything is working, and the radio is all squared away too. He jokingly says “Definitely not supporting the S4.” Which clearly it looks like they indeed will be. Time to get excited folks!

Back in March some rumors were floating around that the CyanogenMod team might not support the GALAXY S 4 at all, which ended up being false. That rumor was debunked when Steve himself confirmed they only announce details on official pages, and once the builds are ready. So while this screenshot doesn’t mean CyanogenMod will be supporting the GALAXY S 4, it looks highly likely right about now.