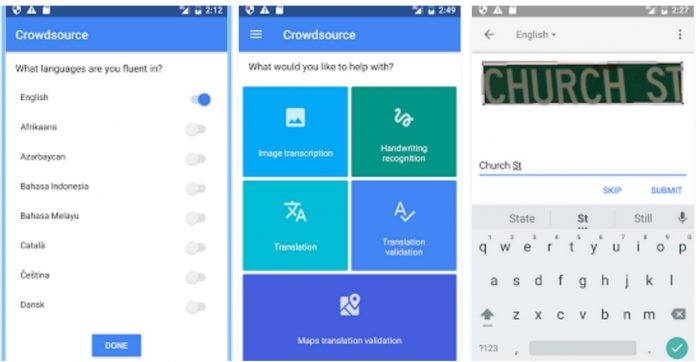 If you’re a bilingual person with a bit of extra time on their hands every once in a while and who likes helping people out without expecting anything in return, Google has the app for you. Crowdsource is a newly-launched app that lets people help in translating things like image transcriptions, handwriting, text, and even Maps data. Don’t expect to get some sort of reward for this though, as Google is relying on the kindness of your heart and your ability to quickly translate these things.

Once you download the app, it will ask you which languages are you fluent in. If you choose just one (aside from English probably), then you will be given image transcriptions and handwriting recognition, with the latter being pretty difficult in reality. If you speak two or more languages, they will give you more in-depth tasks like actual translation or translation validation, which includes that of Google Maps data.

The app says that the micro-tasks that will be given to you should take you only 5-10 seconds each so you can actually do it while you’re on your commute or you’re in line for something or you just have a bit of time to kill. Unlike Google’s Opinion Rewards, which gives you some incentives when you answer a survey that will help a brand, this one is just for you to earn some brownie points for your karma.

You can download Crowdsource from the Google Play Store for free. Thanks in advance for those kind-hearted bi and multi-lingual people who will be contributing their time to the app.