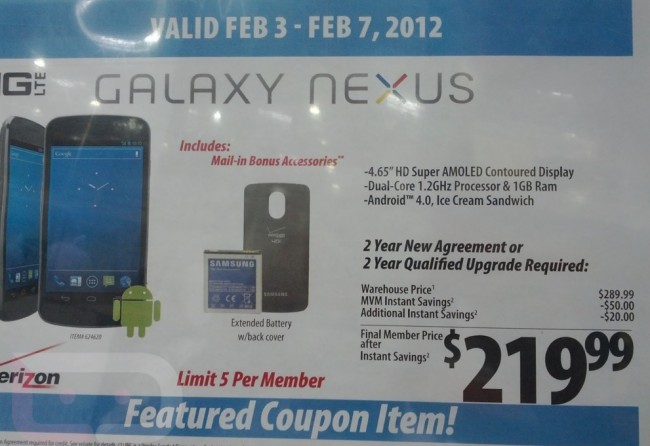 It’s not too late to snag a Verizon Galaxy Nexus for a great price! Sure its been out for a while, but it’s still one of the best phones available. Costco is offering it for $219.99 with a new 2-year contract, but also throwing in a free 2100mAh extended battery. Seeing as the battery would normally cost $49.99 from Verizon, this is a great deal!

After using my own Galaxy Nexus, the extended battery is almost an essential upgrade. If you squint at this snapshot of their in-store advertisement, you’ll see this deal is only available until February 7th (Tuesday). If you can’t make it to the store but still want to take advantage of this promotional pricing, it’s also available for order from Costco’s website.

Sure, Verizon’s Galaxy Nexus isn’t being supported by Google as an official developer device anymore, but it will still receive updates. The GSM variant will nab them quicker, but having 4G LTE embedded within could definitely be worth the tradeoff. They are limiting 5 orders per member, so don’t try over ordering – as it could result in a cancellation.