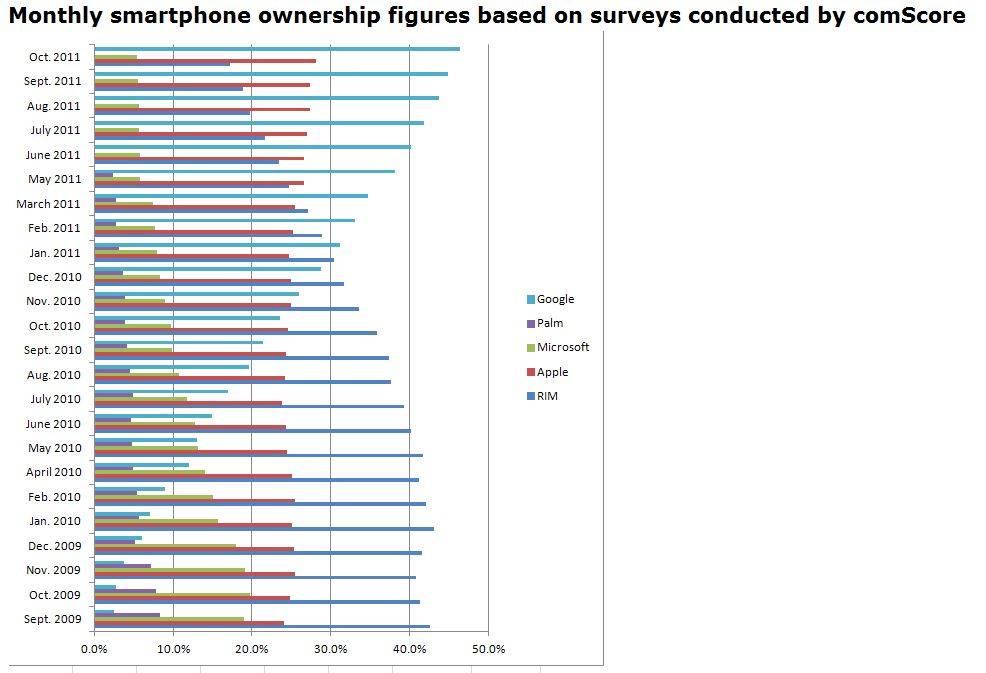 Android is dominating the worldwide smartphone game, and while there are markets where it’s even more dominant than it is in the United States, a combination of population and smartphone interest makes it one of the hottest markets on the planet. Android’s continuing gains were highlighted by Nielsen last month, and comScore backs up their numbers with the latest reports on the US mobile market. According to comScore’s math, 41.6 million Americans now use Android-powered smartphones.

That’s 46.3% of all US smartphones,which now number approximately 90 million. The second banana is Apple’s iOS, which has 28.1% of the market, which figures out to 25.3 million iPhones. Unsurprisingly, BlackBerry and Windows-based phones fell again, to 17.2% and 5.6%, respectively. These statistics are for the month of October 2011, when total smartphone ownership in the U.S. grew 10% overall from the last quarter. Android and iOS together made up two-thirds of the smartphone userbase.

There’s two things that we can take away from this report: one, total smartphone adoption in the US is growing fast enough for multiple OS and device makers to increase their sales at the same time, and two, Android may be approaching a saturation point within the next year. With nearly half the smartphone market running Google’s OS, and Apple controlling a the majority of what’s left, the two giants are essentially fighting over users that are abandoning the arguably weaker platforms of Windows Mobile/Windows Phone 7, BlackBerry, Symbian and others.

If you extrapolated that in the next year, half of all users from other platforms switched to Android, a quarter switched to iOS and another quarter stayed put, that would give Android a 59.1% share of the market, with iOS trailing at 34.5. That’s a very optimistic projection from an Android point of view (and, just to be clear, absolutely unscientific). That said, the continued expansion of the smartphone market in the US and worldwide makes it an imperative for just about every manufacturer and developer.