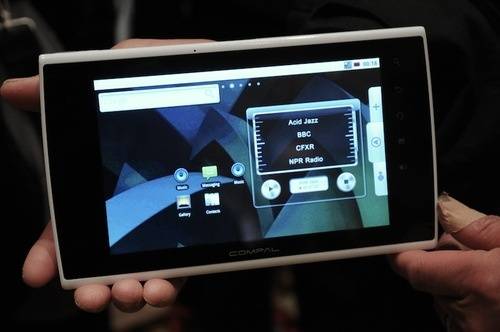 The Compal 7 is an Android tablet that features the famed Tegra 2 chips, it was recently handled at the Netbook Summit here in San Francisco. Is it just me or is the wait for these NVIDIA Tegra 2 tablets following in the footsteps of Flash 10 for Android. It seems like we’ve been waiting on these to arrive for a year now. There have been many prototypes demonstrated with this awesome technology ad yet none of them has hit the streets yet.

This tablet features a 7 inch touch screen, Android 2.1, 3.5mm jack, HDMI and SD card slot. The unit in the demo is clearly and early prototype, it looks good but at the moment it’s extremely sluggish and unresponsive. It kind of resembles the Acer Liquid Android phone, it’s just bigger. It also has capacitive touch buttons on the side, the usual 4 Android keys are joined by a volume key.

Early rumors predict it will be powered by an ARM Cortex-A9 and also have OpenGL 2.0 and Flash integration. The HDMI is said to be able to handle 1080p video and there’s a 12 MP camera. There’s currently no release date set and more information should be available in the coming weeks.