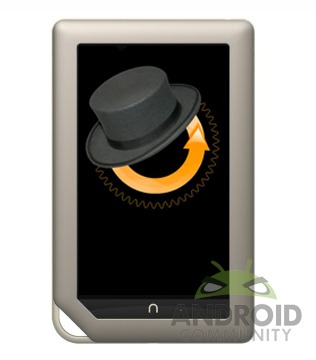 It seems that ClockworkMod may have been successfully ported to the recently released Barnes & Noble NOOK Tablet. If this new tablet is just as hackable as its former NOOK Color, then we could very well see Android 4.0 (Ice Cream Sandwich) on it in due time. What the development community is more interested now is just seeing some custom ROMs as soon as possible.

Though it was reported the Nook Tablet’s bootloader was locked down, AndroidNemith certainly surprised us all with this superquick port. Unfortunately, ClockworkMod may not be fully functional yet. In his tweet, he says “I got CWM (somewhat) running on the Nook Tablet”. I’m sure he’ll let us know exactly what problems he may be running into once it’s further along, but until then it’s just great to know the NOOK Tablet will have a chance at unofficial development.

After all, that’s one of the great features of the NOOK Color. The Android 3.0 (Honeycomb) port was extremely stable, and the NOOK Tablet has even more potential with much better specs. We’ll be sure to keep you updated with its development, and if you haven’t seen our hands-on/unboxing by Cory Gunther – be sure to check it out here.