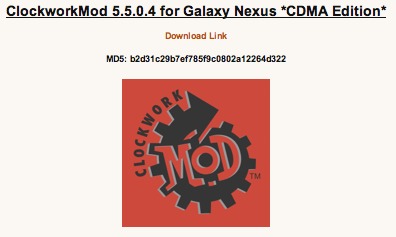 Alright, so now you’ve got your Verizon branded Samsung Galaxy Nexus – finally. What’s the first thing you’re going to do? Root it and install ClockworkMod recovery of course! A compatible CWM recovery was available for the international unlocked version of the Galaxy Nexus, but until recently the LTE model wasn’t supported. For those of you that don’t know what CWM is – the rest of this post may not be for you.

This morning, the first thing I did was keep refreshing the Galaxy Nexus Android Development forum for updates to the CWM port – yet the development team was still having some issues. Mainly with the Android 4.0.2 update Google recently pushed out; users were reporting that root wouldn’t stick, and neither would CWM. But XDA Developer open1your1eyes0 posted a “Final Version” – ClockworkMod 5.5.0.4 for Galaxy Nexus *CDMA Edition* – and it works great.

You may have been through a similar process with your previous device (and practically identical if you’re coming from a Nexus), but if not here are the general installation instructions. First you’ll need to unlock the bootloader, as most retail versions ship locked down. Next, flash CWM recovery. Reboot – and then boot into fastboot mode by holding both volume buttons down and then pressing power. You should then be able to select Recovery! It has been confirmed to be working by many, but as always flash with caution – and good luck!