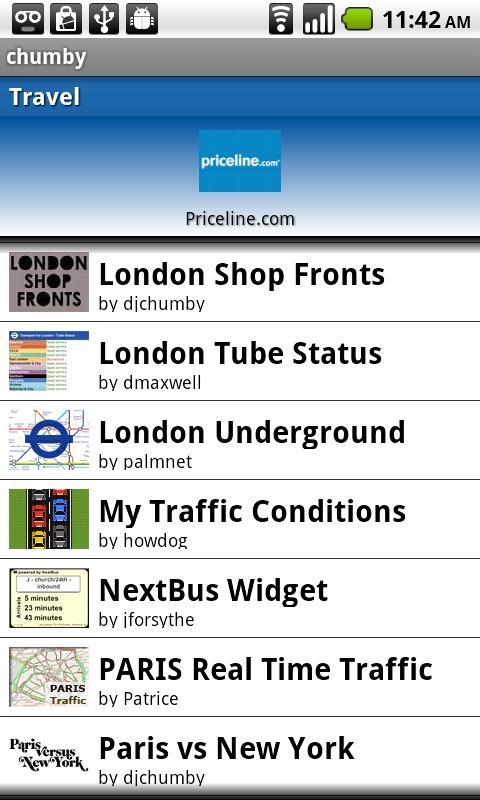 chumby, which is a well known name in the cloud market, has officially launched an application for the Android platform. The application is available right now in the Android Market, but will only appear for those devices that are running Android 2.2 or later. And it’s not a free app, with the cost set at $4.99.

San Diego, CA – December 16, 2010 – chumby industries today makes its mobile app debut via the Android platform, the first of many new launches aimed at expanding chumby’s growing software portfolio for connected devices including tablets, automobile infotainment systems, televisions, and other household products. Now available on the Android Market for $4.99, the chumby mobile app brings the chumby experience to Android 2.2 devices, taking the best parts of the Internet and delivering them in a friendly, always-on, always-fresh format.

“As we are set to vastly expand our line-up of devices operating the chumby software platform, we felt it important to kick off with the Android community as they are an incredibly dedicated user group who embraces open platforms” said Derrick Oien, CEO of chumby industries. “Additionally, new Android powered devices are constantly hitting the market allowing us to offer chumby’s rich and personalized Internet experience to a broad and engaged user base.”

The chumby Android app is best viewed on tablets and docked devices, automatically streaming content in a passive way — everything from slide shows and photo sharing sites to tweets, status updates, stock quotes, video clips, webcams from around the globe, horoscopes, and much more. With a growing catalog of more than 1,500 applications in 30 different categories, chumby delivers content from well-known media partners, social networking sites, and 3rd party Flash developers from around the globe. chumby brings a personalized experience to passive screens allowing consumers to see their favorite apps on what would normally be a dark screen, fueling greater discoverability of content including news, video and other information.

Once downloaded, users either launch the chumby app from the menu to play content or set chumby to appear when the device is docked; having the application run as a screensaver allows the user to use their device much like they would other chumby-powered devices. First time users would need to register for a free chumby account, where they would personalize their dashboard and compile apps into different channels for viewing.

About chumby industries
chumby industries, based in San Diego, is a software company that works with consumer electronics OEMs to bring a rich and personalized Internet experience to a multitude of connected products, ranging from devices as simple as clock radios to high-definition televisions. The open chumby platform enables developers to easily create Flash content for chumby-powered devices resulting in a constantly growing catalog of more than 1,500 applications in 30 different categories.