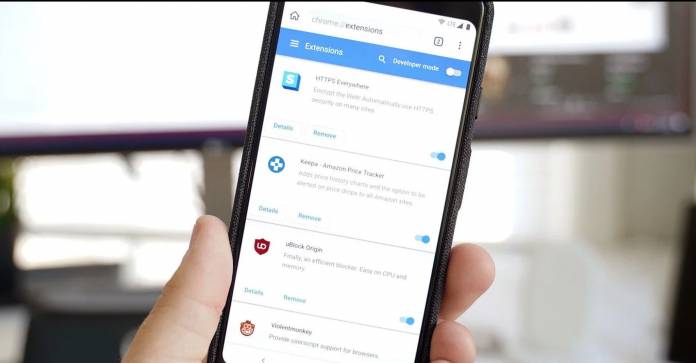 You would think that Google’s own Chrome browser would be the first to get Chrome extensions on Android devices right? But Google/Android can sometimes be weird about certain things and this is one of them. The first Chromium-based browser to have support for full Chrome extensions is the Kiwi Browser, which eventually became an open-sourced project. Now it looks like the developer is working with Google and Samsung to bring extension support “upstream” to Chromium so other Chromium-based browsers will be able to use it as well.

According to 9 to 5 Google, there is now some movement on the front to bring extensions support to other Chromium-based browsers. But first they have to be able to bring it back upstream to Chromium so it will be able to support it for Android devices. Once this is finished, any browser that is based on Chromium, like Microsoft Edge, Samsung Internet, and of course Google Chrome, will be able to add extensions.

It’s also interesting to see that Samsung seems to be involved in the process as some strings in the code show a developer with an @samsung email address. There is also a line the bug tracker description that says “at least 3 variants” of Kiwi are currently being developed, including one with a “very large OEM”. The theory is that Samsung will be rebuilding their Internet browser to be based on the Kiwi browser, hence support for extensions.

Another thing to note is that once this is finished, browsers will only have the option to support extensions. So this may mean that Chrome may not be getting that support since Google doesn’t seem to have changed their position on that. Otherwise, it may just be easier for them to just add extension support rather than depending on Kiwi browser and this open-source process.

This seems to still be in the early stages so it’s too early to say when this will be ready or what the details are. Hopefully we find out more soon, including if Chrome Android users will have the tiniest hope that extensions will be available eventually.