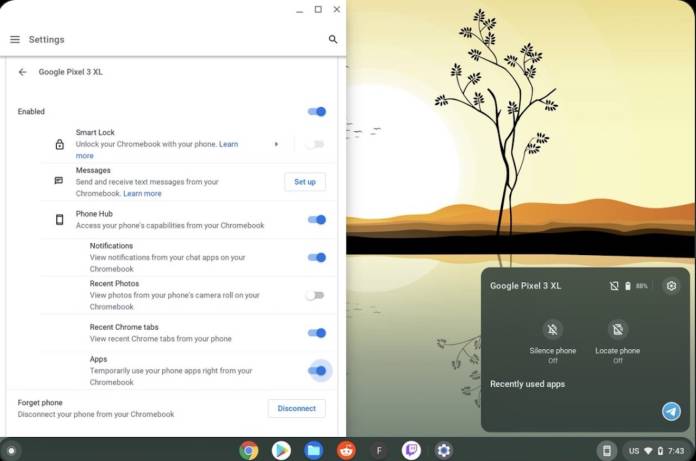 If you own a Chromebook and an Android smartphone, you’ll soon be able to see improvements in how they work together. Chrome OS has Android app support already so you’re able to run some Android apps already on your bigger screen but now it will let you actually mirror the apps that are installed on your smartphone onto your Chromebook. If you receive a notification on your phone, you can forward it to your Chromebook and launch it from there.

XDA Developers shares that the new feature has been spotted by Android tipster Mishaal Rahman after they found evidence months ago that Chrome OS was developing a way to mirror your phone’s screen. The screenshots show a new toggle called Apps in the Phone Hub section. The description says it will let you “temporarily use your phone apps right from your Chromebook”. The way this new feature should work is when you receive a notification on your smartphone, it will be forwarded to your Chromebook. You will then be able to open the app in a window “for a brief period”. How brief that period is still unknown though.

Coming soon: Launching apps from your phone on Chromebooks. When you receive a notification on your phone that's forwarded to your Chromebook, you can click on it on the PC to launch it in a window. pic.twitter.com/j9UEYuR7TW

Other toggles previously in the Hub include viewing notifications, recent photos in your camera roll, and recent Chrome tabs on your Chromebook. If you’ve not encountered Phone Hub yet, it was added to Chrome OS in version 89 and lets you seamlessly connect your Android phone and your Chromebook. It lets you do things like check your battery life, find your phone if you misplaced it nearby, turn the WiFi hotspot on or off.

This new feature doesn’t seem to be live yet in the Chrome OS current build. Even if the settings are there, clicking on a notification received from the smartphone is resulting in an error. The actual launch may be sometime this week after the official launch of the Pixel 6 since we’re expecting some Chrome OS-related announcements as well. Being able to mirror your phone on your bigger screen will be useful for some users, even if it may just be “temporary”.

Interoperability between mobile and desktop devices is something that a lot of OEMs seem to be doing now. Windows’ Your Phone app working with Samsung phones is probably one of the most popular. Let’s see if there will be more that will be added eventually.