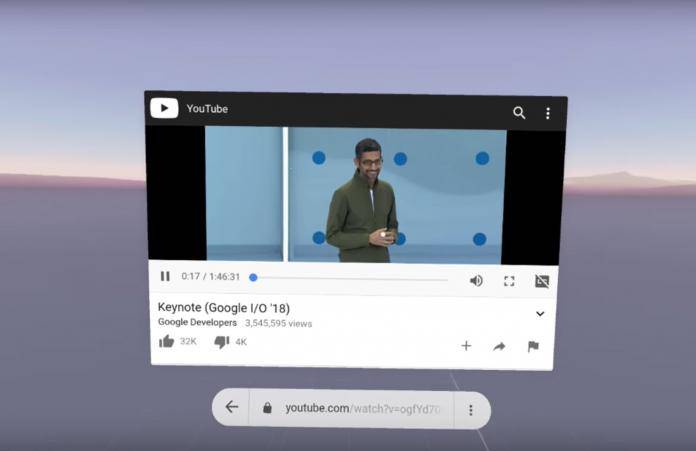 Have you ever dreamed of having the ability to browse the Internet to your heart’s content while wearing a virtual reality headset? No? Well Google says you should be able to want that and actually have that, at least when using their Daydream VR headset. They have now officially brought the VR version of their Chrome browser to the Daydream View headset and also the standalone Lenovo Mirage Solo with Daydream. And while nothing major really changes between browsing on your mobile device and on a VR headset, it’s still pretty cool to have that option for the latter.

Chrome behaves almost exactly on your desktop as it is on your Daydream VR headset. You will be able to access your saved and synced bookmarks, use voice search to, well, search for stuff on the Internet, go on incognito mode if you don’t want them tracking you, and other Chrome features you enjoy. If you’re browsing articles on your phone and you decide to continue reading it on the headset, you can do so. Same goes for videos you’re watching or photos you’re looking at.

But of course Google has some Daydream-specific features for the VR version of Chrome. For one, you have the “cinema mode” which will optimize the web videos that you watch on the browser to the perfect settings for watching on a VR headset. And since Chrome supports the WebVR standard, you will also be able to watch web-based VR experiences on their Daydream View.

Actually, some users of the VR headset have already accessed VR Chrome for some time now but it was through test versions of course or through the mobile app for Android devices. But it’s different for you to be able to launch it from your headset directly is more convenient of course and also more seamless. So even though you didn’t think you needed it, now you’ll be able to use it whenever you want.

As soon as you update your Chrome app to the latest version, you will be able to access it on your Daydream View headset or on the Lenovo Mirage Solo with Daydream and then use it as you would your Chrome browser when you’re on your laptop or mobile phone.