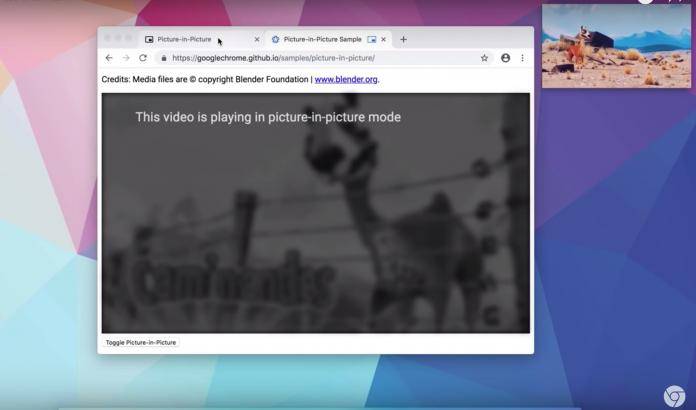 When you’re working or studying, there are times when you just want to have a video playing in the background so you won’t fall asleep or even for inspiration or pure entertainment. But unless you had a second screen like a tablet or phone on the side, you will just hear the audio of the video you’re playing. Now Google is bringing the picture-in-picture feature to Chrome 70 on Windows and Linux (and Mac too) so that you’ll be able to still see the video if you want to.

Picture in picture has actually been available on Android devices since the Oreo update of 2017. But now, it has finally come to your desktop or laptop so that you’ll also be able to enjoy a video playing while you’re doing something else. However, it’s up to web developers whether they want to enable it on their website’s media player and so Google is encouraging developers to check out how to implement this feature.

In the meantime, if you want to see how it works, you can go to YouTube and then right click the video that you want to play twice. Tap on the Picture in Picture button in the context menu. You can then move the floating video overlay wherever you want it on your screen so that you can still watch whatever video you want to be part of whatever other thing it is that you’re doing.

If you want to toggle the feature on any website, there is also an official Chrome extension that you can use. And while the feature per se is automatically enabled on your Chrome browser, it’s still up to the web developer whether you can watch their embedded videos in PiP mode. But if it’s on YouTube, you can do so anyway through the instructions previously mentioned.

Google says Chrome OS and Android will be coming soon, although as mentioned for the latter, if you’re running your device on Oreo, you will probably be able to use PiP mode. Maybe they’re bringing some more improvements so let’s wait for further announcements from them regarding this feature.