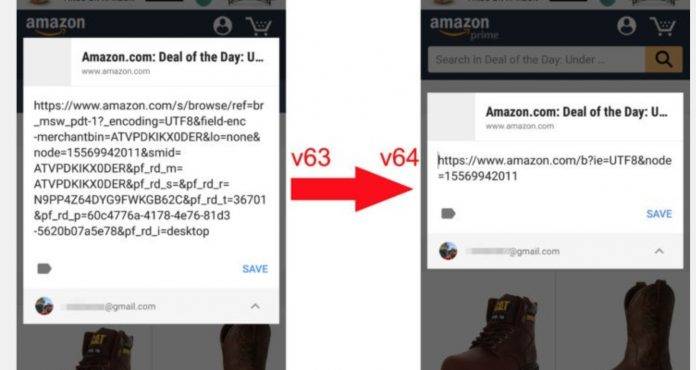 While they will still lead you to the same place (well, more often than not), it’s still sometimes annoying to see those messy URLs when you’re sharing them with friends or contacts. Those tail-end characters in the URL are just tracking or referral items so you actually don’t really need them and they just add visual clutter. The latest update to the Chrome browser now automatically cleans them up of all those unnecessary strings, but only if you share them from the official share menu.

Version 64 of Chrome will now automatically trim the URLs so as not to include all the junk at the end. But this will only happen if you use the share menu, whether you’re copying the address to your clipboard or you’re sharing it directly to another app. This is probably part of the “canonical page” URLs, also similar to the AMP pages with useable URLs, that Chrome started supporting previously. But this is the first update where the general URL streamlining seems to be included.

If for some reason you still need those strings, you can still manually copy the URL and then paste it wherever you need to share it. It will of course take you a few more steps than just using the share menu but at least you will still have those tracking or referral characters, in case you still need them to still be physically seen in whatever app you’re sharing it with.

This automatic URL trimming is only available for Chrome in versions 64 and higher, so you will need to update it to the latest version so you can say goodbye to those never-ending strings that can look messy on your messaging app or your social network.